To heal your relationship with food, it might mean focusing on your body. 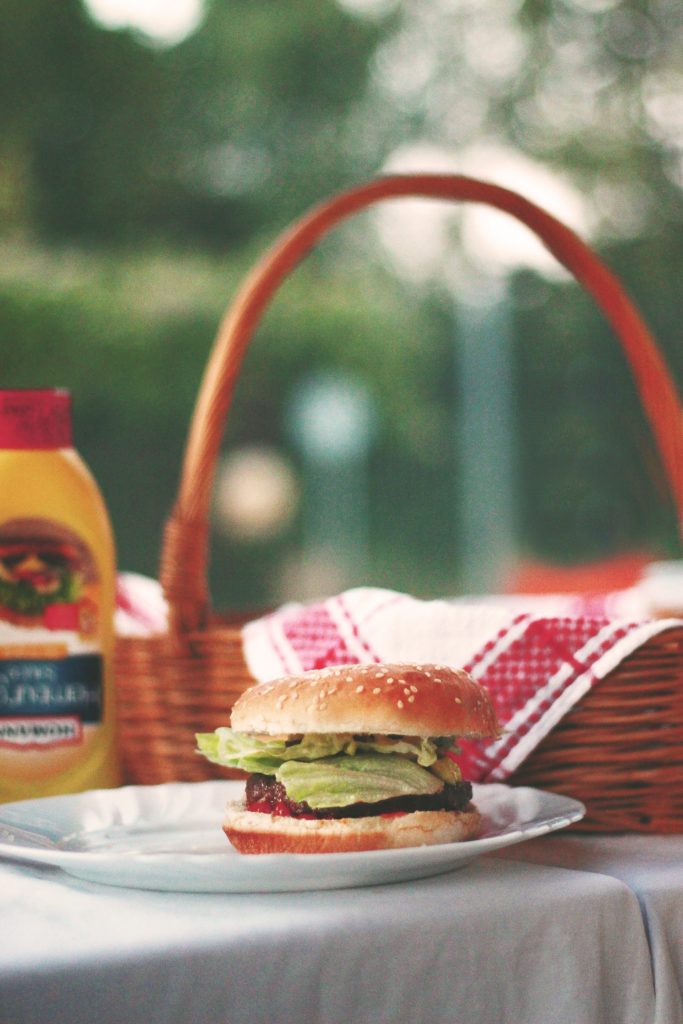 The burger was so good, I went for another. I don’t remember if I finished it. But I do know that I also had a couple different salads, chips, random items and an AMAZING strawberry shortcake. I noticed the volume of food I was eating was greater than normal and surprised that my belly felt really good. Not stuffed. Like for some reason my capacity was greater. It had been a stressful, non-stop kind of day. I was spent. My back-ached, my introverted self wanted to crawl into a hole instead of socialize. I wasn’t sure if I was hungry or past that point. This picnic potluck for preschool families couldn’t have started too soon. Once I began eating, my body communicated that I needed a lot of nourishment. I responded.

I can recall another church potluck where after several days of inadvertently not-quite-eating-enough, my body was eager to play catch-up. My stomach felt bottomless. I filled and filled it and felt just fine. No pain. Just satisfaction.

Other days I come to a meal with high hopes for eating a variety of yummy things (Thanksgiving!) and am disappointingly full much sooner than I want.  Eating more would bring diminishing returns, sadly.

The body is amazing at hinting, nudging, and if we don’t respond, shouting.  Eventually hitting us over the head to get its needs met.

But diet culture makes us second-guess these important signals. It creates guilt over satisfying portions.

The first example I gave would have felt like failure if I had been trying to follow some arbitrary diet rules or portion guide. The perceived “naughtiness” of starting ANOTHER burger or “indulging” in a rich dessert could have kept me from being fully nourished.  Guilt or shame over this seemingly out-of-nowhere appetite could have led me to intentionally undereat mistaking my restraint for discipline.  Then what?  An undernourished body leads one to obsess about what it didn’t get — it doesn’t let things go.  It builds up momentum.

The second example parallels the experience of someone on a diet whose body is pushing to replenish what was lost. Undereating (whether done on purpose or accidentally) leads you to need more to catch up. It’s simple survival not an issue of willpower.

The third example just goes to show that appetite is not static. It waxes and wanes. Sometimes we are surprised by how great it is. Sometimes we wish we had room for more. Being responsive to, rather than fighting, your body’s signals, tends to work much better.

But I live in a thin body. The world around me reinforces that I’m doing okay.  When I teach classes on mindful eating, the audience tends to think “well clearly she practices what she preaches.”  I know because I’ve gotten written feedback that says so.  Assuming that my thinness is a result of my superior eating habits.  It’s not.  Genetics is probably at least 80% of the story.

If you live in a larger body, the world around you assumes and suggests you’re doing it wrong. That your body is NOT trustworthy.  That if you want a second burger or audaciously eat dessert with your dinner, you’re clearly suffering from an appetite issue.  And when someone in a larger body gets those messages on the regular, it is understandable that they will internalize this and quit trusting themselves too.  Like so many of my clients have apologetically said when they first sit down in my office, “I eat too much…obviously.”

Little do they know that I have not already assumed so.  But they have been told (even if not directly) so much that their body is proof of their inability to do right with food…that they believe it.  And I believe it becomes a self-fulfilling prophecy.

So although you might feel that yours is a food issue, there’s a high chance it’s a body issue.  But not a defect with your body itself.  The problem lies in how you’ve been taught to see your body: wrong and untrustworthy.   Righting your relationship with food (if it is even needed), might need to take a back seat to righting your relationship with your body.  This is body image work.  It’s not easy.  But it might just be what helps give you confidence with the eating stuff.  Because when you can stop hating your body (not your fault), stop apologizing for your body, and learn to trust it, the rest gets a lot easier.